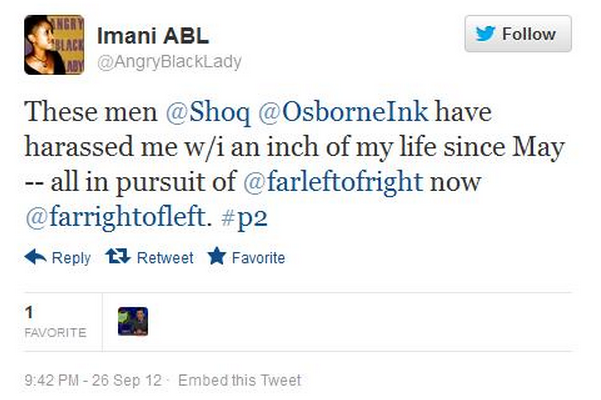 But… but… but I thought this whole ordeal was about @Shoq verbally abusing @vdaze in an 8-month old voicemail. Did something change?

As I carefully illustrated this week, and @vdaze confirmed with her FBI ploy, there are indeed other tensions in the background of all of this @Shoq-drama. In this tweet, Imani Gandy confirms the core of what I have said and then goes on to trivialize the investigation of @FarRightofLeft, a conservative operative who has harassed progressives relentlessly, not to mention blown up the progressive Twittersphere for months saying that liberals should be “taken out.”

Imani seems to be under stress. Maybe the appearances that her uber-webmaster @HeatherEChase has been associating with @FarRightofLeft are making her a little bit edgy?

But wait, there’s more! @AngryBlackLady says @Shoq and I have harassed her “within an inch of her life,” implying that we have physically or otherwise seriously threatened her in some way. Does she — or anyone — have any supporting evidence of this? Y’know, like, maybe:

Because without such exhibits, her statement would appear to be libelous. I think when she said “harass,” she probably meant ‘I am tired of you methodically deconstructing my obsessive 24/7 ballyhooing of the @Shoq-the-abuser story.’

As it is, her credibility in this matter has been obliterated by my evidence trail, which her incessant tweeting keeps embellishing. I doubt very much that she will stop making these unintentional revelations, and to use her favorite word, the hilarity will continue.

Related: Breaking: FBI to Investigate @Shoq for Breaking Up With @vdaze?