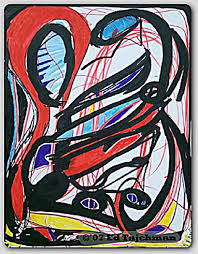 I was pondering culture wars today when I found this UK Independent report on a secret CIA program that supported abstract expressionist art:

The next key step came in 1950, when the International Organisations Division (IOD) was set up under Tom Braden. It was this office which subsidised the animated version of George Orwell’s Animal Farm, which sponsored American jazz artists, opera recitals, the Boston Symphony Orchestra’s international touring programme. Its agents were placed in the film industry, in publishing houses, even as travel writers for the celebrated Fodor guides. And, we now know, it promoted America’s anarchic avant-garde movement, Abstract Expressionism.Initially, more open attempts were made to support the new American art. In 1947 the State Department organised and paid for a touring international exhibition entitled “Advancing American Art”, with the aim of rebutting Soviet suggestions that America was a cultural desert. But the show caused outrage at home, prompting Truman to make his Hottentot remark and one bitter congressman to declare: “I am just a dumb American who pays taxes for this kind of trash.” The tour had to be cancelled.

Nothing has changed: America has always been a land of great creativity that is mostly lost on its own political leadership. Read the rest here.