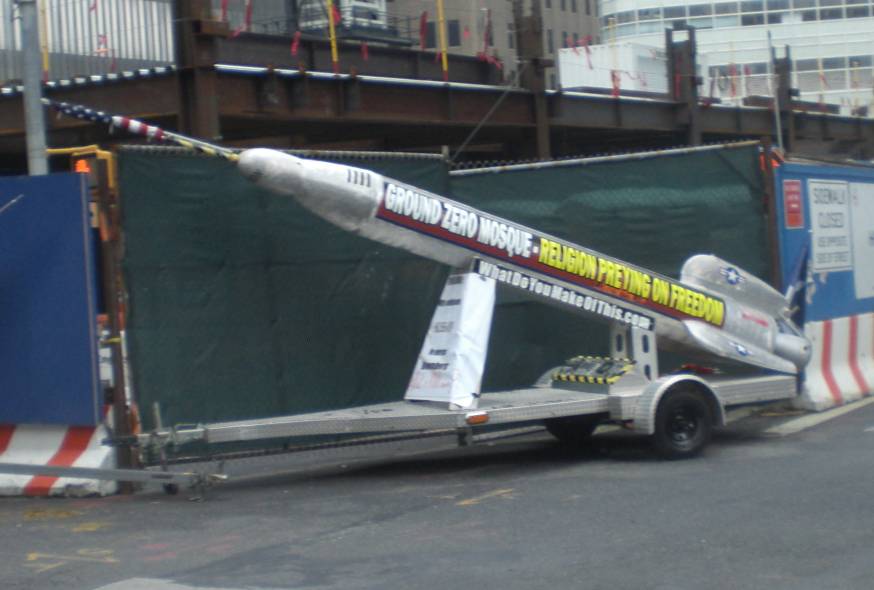 There is no such thing as “Sharia Islam.” But it doesn’t matter whether the war is real, right? Infinite conflict keeps us angry, afraid, and stupid. As long as we hate and fear the Muslim, we will keep voting for idiots. Just look at the Republican presidential hopefuls willing to sign Bob Vander Plaats’s “marriage vow:” Michele Bachmann and Rick Santorum.

Vander Plaats’s Islamophia is signally stupid, even for the cult of fear and ignorance. From Justin Elliot’s interview with Vander Plaats:

There’s one section in the pledge that says the candidate has to reject — the phrase used is “Sharia Islam” — can you describe what you mean by that phrase and what you want the candidates to reject in that?

And you see that as something that is a dominant thing in Islamic cultures and societies, or more of a historical idea?

No, there’s a lot of American Muslims who reject Sharia. And we believe the president of the United States needs to be aware of some of the threats to our culture, and one of them is Sharia Islam in our opinion.

Vander Plaats is an idiot and he is making stuff up. There is no such thing as “Sharia Islam.” Perhaps Vander Plaats meant Shi’a? I’m fairly sure he doesn’t know the difference between Shi’a and Sunni, and doesn’t care. For that matter, he may not know a Druze from and Alawite and I’m fairly certain he can’t tell Sikh from Sufi. Wahabbist or Babi, Sufi and Salafist, they are all the same to him — one great, monolithic house of Satan.

Santorum and Bachmann can’t tell them apart either, and don’t try. None of them actually know anything about sharia law.

So let’s review what Islamic jurisprudence does for civilization: butcher shops must be certified halal. Marriages must be officiated. Divorce decrees must be issued. Disputes must be settled by impartial judges. Wills must be probated, criminals punished. “Sharia” is the Arabic word for how Islamic societies have done these things, but it does not mean all of these things at the same time.

Islam and sharia aren’t one same thing, either. Sharia is of the Qur’an, but not in the Qur’an. Muslims are surprisingly adaptable to civil society institutions wherever they emigrate, keeping the halal inspections and marriage ceremonies and wills while ditching the probate court, the marriage certificate, the divorce court, the civil courts, and the criminal courts.

There is actually no “pure” Islamic state anywhere, even in Saudi Arabia or Iran. Civil institutions exist across the Muslim world, as not all nation-states within the “Muslim world” use all forms of sharia law. None of them feature “Sharia Islam.” Even within societies, Muslims don’t all agree on what the word, which literally translates as path to a well, even means.

So Americans need not fear all of Islam all at the same time; Muslims are not an alien monolith. You can’t simply draw a shape on the map and call it Islam, or “sharia” for that matter. Observant Muslims are living by sharia right now in America, but the word doesn’t mean for them what Vander Plaats thinks it means.

Sometimes, in some places, revivals of sharia law have come in reaction to the failure of local civil institutions. If government employees require baksheesh to recognize your marriage, probate your father’s will sometime this decade, or deliver justice, then you might be tempted to find an alternative, too.

The leading cultural competitor to secular government is a mosque — one that already provides you with charity. So the worse things get, the more powerful the mosque becomes. Hamas won in the Gaza Strip with a “shock doctrine” of disaster evangelism; culture warriors in America operate in a similar way.

Once in power, they began to rip Thomas Jefferson from the history books and insert all manner of stupid. The goal is to make sure Americans are dumb enough to believe that such a thing as “Sharia Islam” exists. This is why Oral Roberts University (Michele Bachmann being an alumni) was built to create lawyers who believe Jesus is the foundation of American law. See why I defend Markos from charges of hyperbole when he calls these people “the American Taliban”?

And Vander Plaats has candidates pledging to an extreme, sex-obsessed agenda with broadly regressive attitudes. His movement has its own madrassas. His jihad is the same one he projects on all of Islam: church versus state.

At times, mosque and state have balanced one another; at other times, they have interfered with one another, a story as complex as the European Christianity that produced Bachmann (anti-papist Lutheran) and Santorum (Opus Dei Catholic). “Sharia Islam” is a projection of Vander Plaats’s own political evangelism: “they” are all in it together — just like we are.