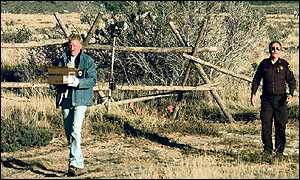 And the Matthew Shepard case, there’s been a fair amount of information that came out that that really wasn’t the motivation of the people who killed him, but they did receive the maximum penalty under the law. (Emphasis Mine)

As I said when Virginia Foxx repeated this lie in April,

Since when do robbers target their victims for kidnapping, transport them to the middle of nowhere, and beat them to death? On what planet is this considered a logical sequence of events? In what dimension?!

Teh Wacky™ is a species of irrationalism spawned at the fringe. After metastasizing in the wingnut blogosphere for years, this particular (and particularly nasty) falsehood has finally met daylight thanks to Representative Foxx’s inept research. She, or an assistant, combed the echo chamber for a talking point and came up with an entirely fictional account of how Matthew Shepard died. Never mind the evidence, or the killers’ confessions…It wasn’t a hate crime because we say so. And as always, the invention gets used in pursuit of Cultural Warfare.

“Truth” is entirely relative to wingnuts. “Facts” are whatever they want them to be.